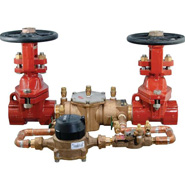 If you have received a letter from the water department requiring you to test your backflow preventer, you can rely on VIP Plumbing to take care of it for you quickly and efficiently.

Not only do we re-certify your backflow preventer, we will submit all of the necessary paperwork with the water department, mailing copies back to you.

You can count on us for quality work.

If you need a backflow preventer installed or have questions about the County’s program, you can depend on VIP Plumbing to help you with this vital and necessary program.

Water distribution systems are designed with the intention of the water flowing in a certain direction – from the distribution system to the consumer. However, hydraulic conditions within the system may deviate from the “normal” conditions, causing the water to flow in the opposite direction. Therefore, it is possible and common for the water to flow in the opposite direction in unprotected systems. This is called backflow. When this happens the water system can become contaminated with pollutants that could be harmful to water users.

Backflow is caused by cross-connections that have the potential of allowing contaminants into the drinking water system. Back siphonage can occur when the pressure in a tank or water trough is lower than the water system’s pressure. This could allow the influx, or pulling, of contaminated water into the system. Another cause of backflow is back pressure. Back pressure occurs when there is higher water pressure in a fire protection system or in a multi-story building that contaminated water could be forced into the public water system.

There are multiple types of backflow preventers, the three most common being the pressure vacuum breaker (PVB), the reduced pressure zone (RPZ), and the double check assembly (DCA). These are all installed in the water system immediately after the isolation valve.

Pressure vacuum breaker assemblies (PVB) are the most common, inexpensive type of whole-system backflow preventer. It consists of an inlet shutoff valve at the bottom, a single valve body consisting of a pressure vacuum breaker, check valve, and two test cocks, and an outlet shutoff valve. As well as being inexpensive, PVBs are relatively simple in design, and are easy to install, maintain and repair.

The DCA is the most common type of approved backflow prevention device for use in underground or in-line installations. In-line (or below-grade) simply means that the backflow device is parallel with the piping of the sprinkler system; unlike the PVB, the DCA does not have to be installed 12 inches above the highest point in the system.